A Finance blog by Paul Bennion.

A new report from the National Housing Supply Council has highlighted the shortage in housing across Australia, particularly in New South Wales (NSW), Queensland, Western Australia and the Northern Territory.

In its June 2012 report, “Housing Supply and Affordability – Key Indicators 2012″, the Council estimates that the cumulative housing shortage since June 2001 has increased to nearly 230,000 dwellings.

Areas of acute growing shortage include Queensland and NSW, where there was virtually no undersupply of homes 10 years ago. According the Council’s report, NSW now has an estimated shortfall in properties of 89,000, followed closely by Queensland, with an estimated gap of 83,000.

Paul Bennion, Managing Director of property depreciation specialist, DEPPRO said the report should give confidence to both investors and developers, with evidence of long-term demand for property across Australia.

The property market has been relatively depressed over recent years in areas such as Queensland, due to the impact of very high interest rates and the high Australian dollar,” Bennion explained.

High interest rates have discouraged the construction of new homes, resulting in a growing undersupply of housing in populous states such as NSW and Queensland.

With interest rates now falling, there is every prospect the demand for housing will increase. If interest rates continue to fall sharply, then the affordability of homes will increase and as a result, there could be a major rebound in the property market within a short period time,” he said.

The National Housing Supply Council report on housing shortage can be downloaded at www.nhsc.org.au/content/publications.
Estimated dwelling gap since June 2001 (‘000 dwellings) in states and territories 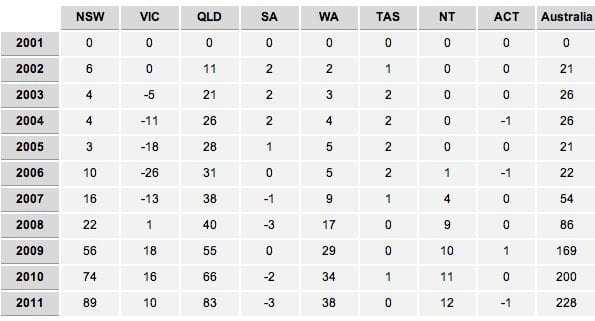